We think about the future to find out what’s possible.

But sometimes we don’t need to go all the way to the future to imagine how things can be different. From where I sit right now in Silicon Valley (and getting ready to fly 7500 miles south to EduTECH  in just a few days!) Australia is already a place where everything can be different…. at least when it comes to making higher (or tertiary) education affordable.

Here in the U.S., the Australian model of linking learning with earning is considered by many to be a model for our own future. Here’s a recent summary from the Slate opinion piece “Australia gets student loans right“:

Australia offers students an income-based student loan plan, and has since 1989, when the system was set up to compensate for the fact that universities were charging tuition at all. That was a change. Higher education had been free in the 1970s and 1980s.

Today, there are two ways Aussies can choose to finance their college educations. If they pay up front, they get a 10 percent discount. Most don’t do that, however. That’s where where Australia’s income-based repayment plan comes in.

Australians borrow money from the government through the Higher Education Loan Program (or HELP—get it?) and related offshoots. When it comes time to repay the bill, the monthly amount has nothing to do with the sum borrowed. Instead, debtors earning more than AU$54,000 ($38,000) pay between 4 and 8 percent of their income, depending on how much they take home annually. Unemployment or illness? Salary falls under the minimum earnings required for repayment? No worries. Payments temporarily cease, with no interest or penalties accruing to the borrower.

Moreover, unlike in the United States, where students need to make strategic decisions whether to consolidate their loans at a particular interest rate because they will not get a do-over, there’s no such issue in Australia. The interest rate is set by the consumer price Index—that is, the rate of inflation.

Finally, making payments is easy. It’s an automatic deduction, courtesy of theAustralian Taxation Office. (This is how the expat loophole developed.) And, yes, a borrower can repay the loan early, if he or she so desires.

Another great thing? Unlike certain American politicians (Hi Marco Rubio!), Australian pols don’t complain about the number of philosophy majors running up debt they can’t pay off. If a student attends a public university in Australia—something the vast majority do—tuition is set, in part, by the course of study. The greater the expected lifetime income return, the greater the cost. So a degree in the humanities costs less than a degree in education, which costs less than a medical education.

I don’t mean to make this sound like nirvana. Australians are increasingly worried about the amount of student-related debt, which is growing rapidly. (One estimate has it surging from AU$50.3 billion this year to AU$70.4 billion in 2018.) That means students will owe more money, likely paying it off over a longer period of time. There is also concern over what those down under like to call “doubtful” debt—estimates are that 20 percent of students will never be flush enough to repay their loans, leaving taxpayers on the hook.

So while many U.S. educators, policy-makers and parents look to Australia to imagine our own future, now we have the chance to see what the view of the future is from the Australasia region.

This Learning is Earning game was  created to explore possible solutions to  urgent challenges in the United States learning landscape — including, near the top of the list, the growing cost of higher (or tertiary) education and unsustainable student debt. Now, we have this wonderful opportunity to zoom out and take a global perspective.

U.S. players see blockchain technology as a way to transform the finances of education. But what else can it do?

If you’re attending EduTECH, you more likely than not have a completely different set of expectations from U.S. educators about what is possible, what is plausible, and what is desirable. In other words: You, collectively, can take this game to the next level. So play a card — and show us how the future can be different! 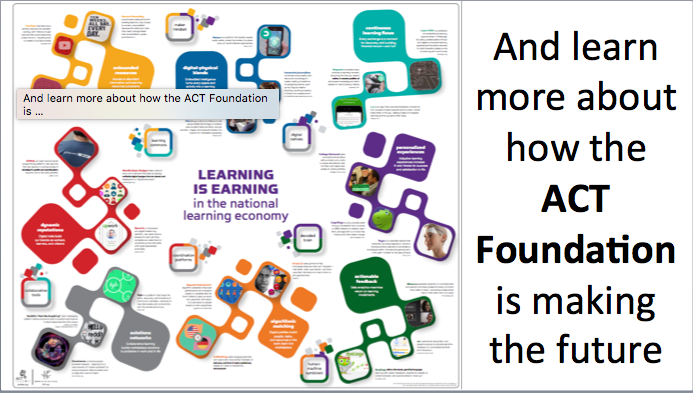